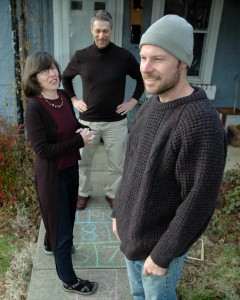 Long ago, in Philadelphia, Rya endured classical piano lessons for an entire childhood… Meanwhile, Paul, in the DC suburbs, had delusions of being in the Monkees and banged on any instrument he could reach… He eventually stumbled on traditional music… In the mid ’80s, he found himself playing for a small dance where only 3 couples showed up. The flute player grabbed him and made him dance. His reluctance melted away… In ’88 he started the contradance in Harrisonburg, VA (now in Dayton)… Meanwhile, in Knoxville, TN, Aaron was 11 and saw his cool uncle play the drums and became obsessed… Paul learns how to call… In the 90’s, Rya discovered contras to Jeremiah McLane’s solo accordion at her brother’s wedding in Vermont… Paul played for many dances with the Buzzard Rock Bayou Boys, who broke up 12/31/99… Then Rya moved to Belmont in Charlottesville, started dancing fanatically, joined the Charlottesville contradance board, and began volunteering for the Fall Dance Festival… Aaron moved to Belmont and stumbled onto contradancing. He realized that dancing is like playing the drums… Paul moved to Belmont… Paul and Rya played in the band Catharsis for a few years… Rya played for waltzes and English country dances… Paul walked over to Aaron’s house, knocked on the door and invited him to form a new band.

As far as we know, George Rettie (aka “The Big Dipper”), was the first to suggest the name for a contradance band, but it took us years to form a band worthy of the name. And why Floorplay? We tried playing on the ceiling, but that didn’t work out as well. But some people don’t hear the first “L” at first and wonder why there are just three of us! So we’ve taken to pronouncing the name “Fllllllloorplay”.